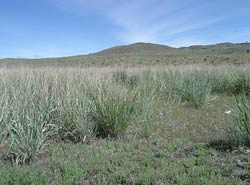 Solonetzic soils (or Natric subgroups in USDA Soil Taxonomy) occur in the same ecozones as Chernozemic soils. These soils are characterized by low (exchangeable) calcium to sodium ratio (the ratio is 10 or less). The higher content of exchangeable sodium may be either due to high sodium content in the parent material (e.g. shale) or sodium could have been deposited in the soil profile by groundwater. The diagnostic horizon of Solonetzic soil is a Bn (or Bnt), and this horizon is very hard when dry and it swells and becomes relatively impermeable when wet.

These soils have a solonetzic Bn horizon and either no Ae horizon or Ae that is ≤ 2 cm thick.

Soils of this great group have an Ae thicker than 2 cm and an intact Bnt or Bn.

These soils also have an Ae thicker than 2 cm as well as a distinct AB or BA horizon (formed by disintegration of Bnt horizon).

These soils have any of the features listed above plus a slickenside horizon within 1 m of the soil surface.