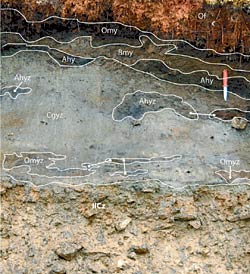 Soil mixing due to freeze/thaw is visible in this Cryosolic profile.

Cryosols (or Gelisols in USDA Soil Taxonomy) have permafrost either within 1 m of the surface or within 2 m if the pedon is strongly cryoturbated in the active layer.  They form in regions that have a mean annual soil temperature below 0°C. Cryosols occupy much of the northern third of Canada.

The great groups of the Cryosolic order are defined by two main criteria (1) the presence or absence of obvious cryoturbation, and (2) the nature of the parent material (mineral or organic).

These soils have formed in organic parent material (i.e., material with >17% organic C by weight). They are similar to soils of the Organic order in terms of the diagnostic thickness of the organic layers, but they also have permafrost within 1 m of the surface. Generally, there is no evidence of cryoturbation in soils of this great group.

The soils of Turbic great group are characterized by the marked evidence of cryoturbation. Within the soil pit, this will appear as irregular or broken horizons and evidence of mixing of the horizons. At the soil surface, this may also appear as patterned ground. Given the instability associated with actively turbic sites, surface vegetation may be minimal or completely absent, with parent material evident right at the soil surface.

Static Cryosols are mineral soils without evidence of cryoturbation. They are distinguished from similar soils of other orders (such as Brunisols) by the presence of permafrost within 1 m of the surface. They commonly occur in association with the other two great groups but tend to be found in portions of the landscape with very coarse or recently deposited parent material and/or low moisture levels inhibit the development of turbic features.