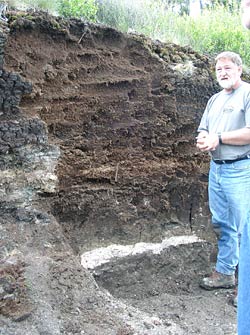 Organic Soils (or Histosols in USDA Soil Taxonomy) are composed primarily of organic mater and include soils commonly known as peat, bog or fen soils. Most of these soils are saturated with water for prolonged periods of time. Organic soils contain 17% organic C (or 30% organic matter) by weight. Soils of the Organic order are the dominant wetland soils found in forested regions of Canada but they also occur in non-wetland positions in upland sites where leaf litter accumulates.

It is not uncommon to have accumulations of organic matter deposits in Organic soils of several meters in thickness.

The master horizon for the wetland Organic soils is the O horizon. The three decomposition stages are assigned Of, Om, or Oh designations depending on the degree of decomposition of the organic material. The upland versions of the Organic order are composed of leaf litter and other woody debris, which are termed folic materials. These organic horizons are assigned an L, F, or H designation, depending again on the degree of decomposition.

The placement of wetland organic soils into the three main great groups of the Organic order depends on depth relationships of the organic layers within the control section. For Organic soils the control section extends from the surface to a depth of 1.6 m (or to a contact with mineral soil or bedrock if this occurs within 1.6 m of the surface). Organic soils are divided into four great groups. Three of these represent Organic soils formed in wetlands and are separated on the basis of degree of decomposition of the organic material. The fourth represents organic soils formed in upland organic materials and are soils that are only briefly saturated with water.

These Organic soils are at an intermediate level of decomposition (between Folisols and Humisols). They have a mesic layer (or middle tier), with a fiber content between 10 and 40% (by volume). Mesic material is usually classified on the van Post scale of decomposition as class 5 or 6.

Soils of this great group are at the most advanced stage of decomposition of the great groups of Organic soils; and most of the material is humified with few recognizable fibers. A humic layer has a higher bulk density, usually >0.195 Mg m-³, and a lower water-holding capacity than fibric or mesic layers. Humic material usually is classified on the van Post scale of decomposition as class 7 (or higher) and rarely in class 6.