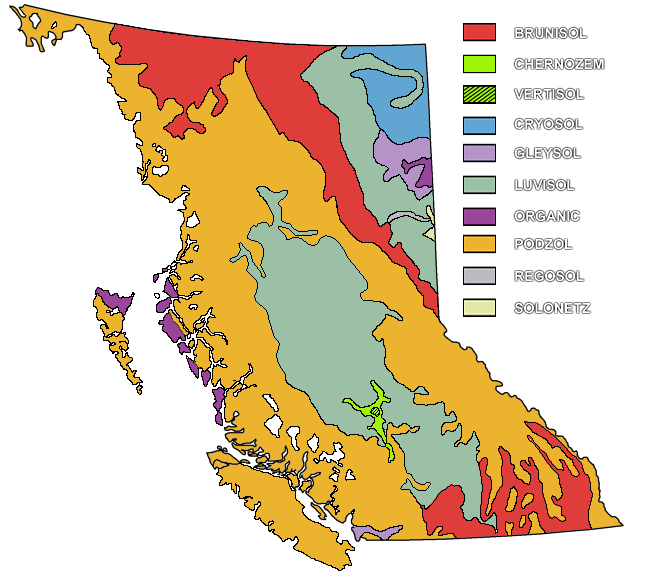 Welcome to the Virtual Soil Monolith Collection at UBC!

This interactive website showcases the soil monolith collection stored at the University of British Columbia (UBC) by providing learning community with an overview of this unique collection of 197 display models assembled over the past four decades.

There are five classes recognized in the hierarchical scheme used for the Canadian System of Soil Classification. These include: orders (the broadest, most general category), great groups, subgroups, families, and series. Currently, there are 10 orders in the Canadian System of Soil Classification and we have organized our collection according those orders

To learn more about each soil order, mouse over its key in the map legend. Information will appear below the image. 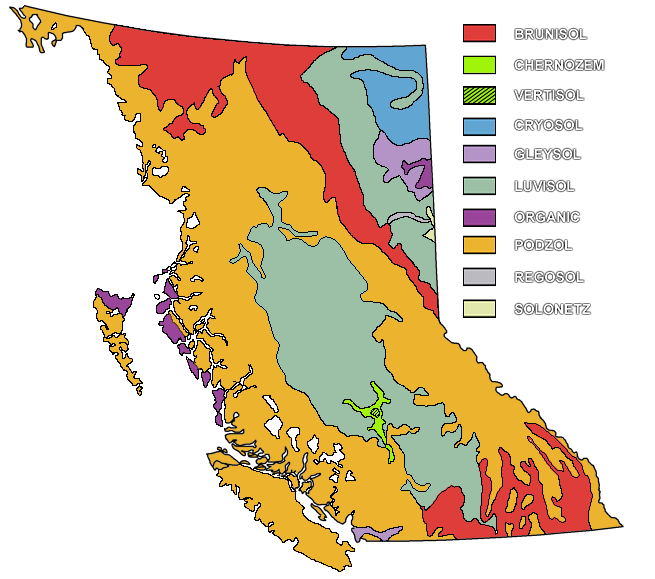 Brunisols have enough horizon development to exclude them from Regosols but lack sufficient development required for other soil orders. Brunisolic soils can be viewed as a stage in an evolutionary sequence that begins with an unweathered parent material (Regosolic soils) and ends with development of a “mature” soil (e.g., of the Podzolic or Luvisolic orders).

Chernozems are grassland mineral soils that have a dark-coloured chernozemic Ah horizon which is at least 10 cm thick, has up to 17% organic carbon, C/N ratio lower than 17, and base saturation above 80% (with calcium as the most dominant cation on exchange complex).

Vertisols are heavy textured soils (with ≥ 60% clay) with shrink-swell characteristics. They lack the horizon development diagnostic of other horizons. Disruption of soil profile and mixing caused by shrink-swell of the soil mass are typical processes occurring in these soils.

Cryosols have permafrost either within 1 m of the surface. They form in regions that have a mean annual soil temperature below 0°C.

Gleysols are poorly drained mineral soils that are saturated for a substantial periods of the year. Their profiles show evidence of reducing conditions caused by a lack of oxygen.

Luvisols are forest soils that have a light coloured Ae horizon as well as an Bt horizon in which silicate clays have accumulated.

Organic soils are composed primarily of organic mater and include soils commonly known as peat, bog or fen soils. Most of these soils are saturated with water for prolonged periods of time.

Podzolic soils are found within coniferous forest ecosystems. They have B horizons that are enriched with amorphous material composed of humified organic matter, aluminum and iron.

Regosols are weakly developed soils to meet the classification requirements of other soil orders. They lack a recognizable B horizon (i.e., B horizon is less than 5 cm thick).

Solenetzic soils are mineral soils that contain a high proportion of exchangeable sodium relative to calcium ion in their B horizon.
To learn more about soils of Canada please visit http://www.soilsofcanada.ca/